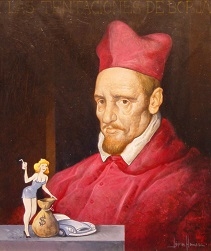 Manuel Lopez Herrera was born in Madrid Spain in 1946.  Herrera began with classes in drawing and painting at the School of Arts and Crafts and later at the Circulo de Bellas Artes in Madrid.  He worked in advertising creating paintings, designs and illustrations for various publications, magazines and books from different countries.  An official ‘copyist’ in the Museo del Prado in Madrid where he studied and practiced the techniques of classical painters.  In 1973 he was awarded a scholarship to further his studies in Rome, Florence and Venice, and in 1976 he completed his studies in London, England.  Herrera participated in contests and competitions in drawing and painting garnering numerous awards and accolades.

Participated with Rodrigues Acosta Foundation on the work of Federica Garcia Lorca in the exhibition ‘The Art of the Enlightenment’.
Illustrated the New Rules of Bullfighting for the Official College of Veterinarians of Madrid as the Animal Protection Manual.
Archaeological Museum in Alcala de Henares artwork on 'Otzi' The Ice Man Wine. DARWIN 100 Anniversary.