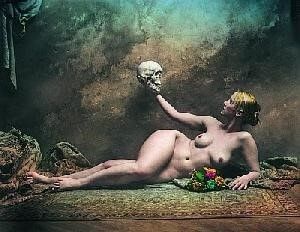 From the late 1970s he gradually became recognised in the West as the leading Czech photographer.
His best-known work is noted for its hand-tintedportrayal of painterly dream worlds, often inhabited by nude or semi-nude figures, surrounded by bare plaster walls or painted backdrops, frequently re-using identical elements. In this they echo the studio and tableaux works of mid nineteenth century erotic photographers, as well as the works of the painter Balthus, and the work of Bernard Faucon. Religious motives or the ambiguity between man and woman have also been some of his recurring themes. His work was the subject of attempts at censorship in the West during the 1990s. Saudek published 20 books, held over 400 exhibitions and is collected by all major musea in the world, including e.g. “Het Stedelijk Museum” in Amsterdam.