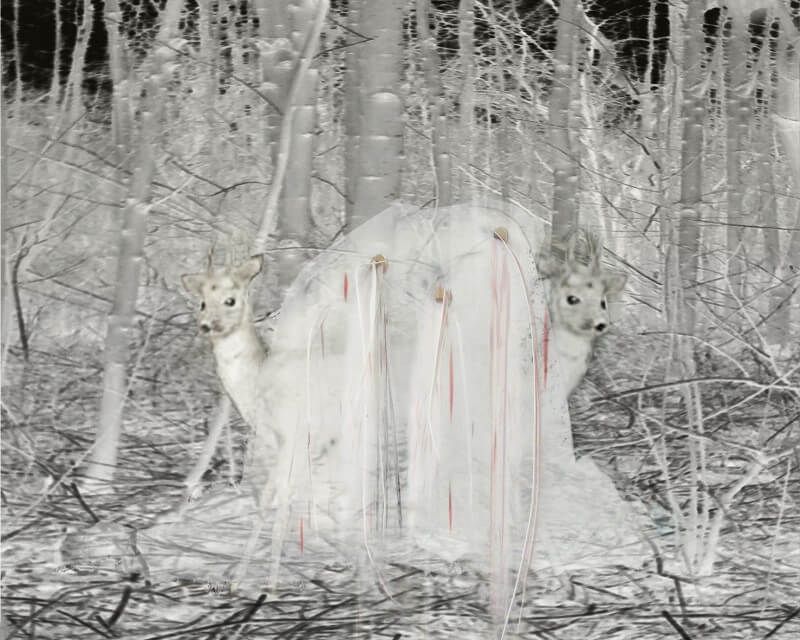 The Dutch artist Barbara de Vries mastered at the Rietveld Academie and the St. Joost Academie in graphic art, industrial design and theatre design. Although she worked with several famous theatres, Barbara finally got specialised in photography. The atmosphere in her work is a midway between fantasy and reality. Her images are mostly blurred, out of focus, with glimpses of reality. The Dutch curator Maarten Bertheux wrote as follow about her work: ‘Work of Francis Bacon and Marlene Dumas are relevant for the work of Barbara de Vries. Her work contains digital, manipulated, photographic material printed on Japanese paper. She combines and deforms her photographs in order to create her layered images. When she uses soft contours it brings in mind an aquarellist way of painting, a style De Vries used frequently before she started to use the computer as a tool in her photographic work. Her background as a stage designer has also influenced her actual work. This experience appears in the theatrical and dramatic setting and in the way she manipulates the light. In the photographic work there can be a clear definition of space, but equally she uses an indistinct space that can vary from a sfumato like space to a space where figures seem to float in. The figures are constructed out of several limbs and elements that are reconstructed in a new way, creating a new figuration. It seems as it is the capability of De Vries to crawl under the skin of her models and analyze the basic psycho and character of the person she is working with. The photography of Barbara de Vries evoke feelings of hope, desire and consolation.