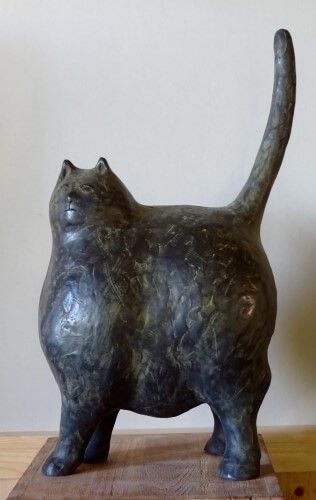 Evert van Hemert (Haarlem, 1952) studied for ten minutes at the Rietveld Academy, but he decided academic regimes were not for him. For some years he pursued a rather succesful carreer in advertising until at 23 he quit his job and strayed through Europe, working as a street artist. Until recently he lived and worked in New Orleans, Haarlem and Kolderwolde, a small town in the Dutch province of Friesland. Kolderwolde is now his only working and living place. Van Hemert likes to go his own way in both life and art, but for him that doesn’t mean his art can’t be figurative. His sculptures are naturalistic and full of life. Often round and voluptuous, but never static. And preferably not on a pedestal, because the artist likes his sculptures to be near their audience, as part of the living space.