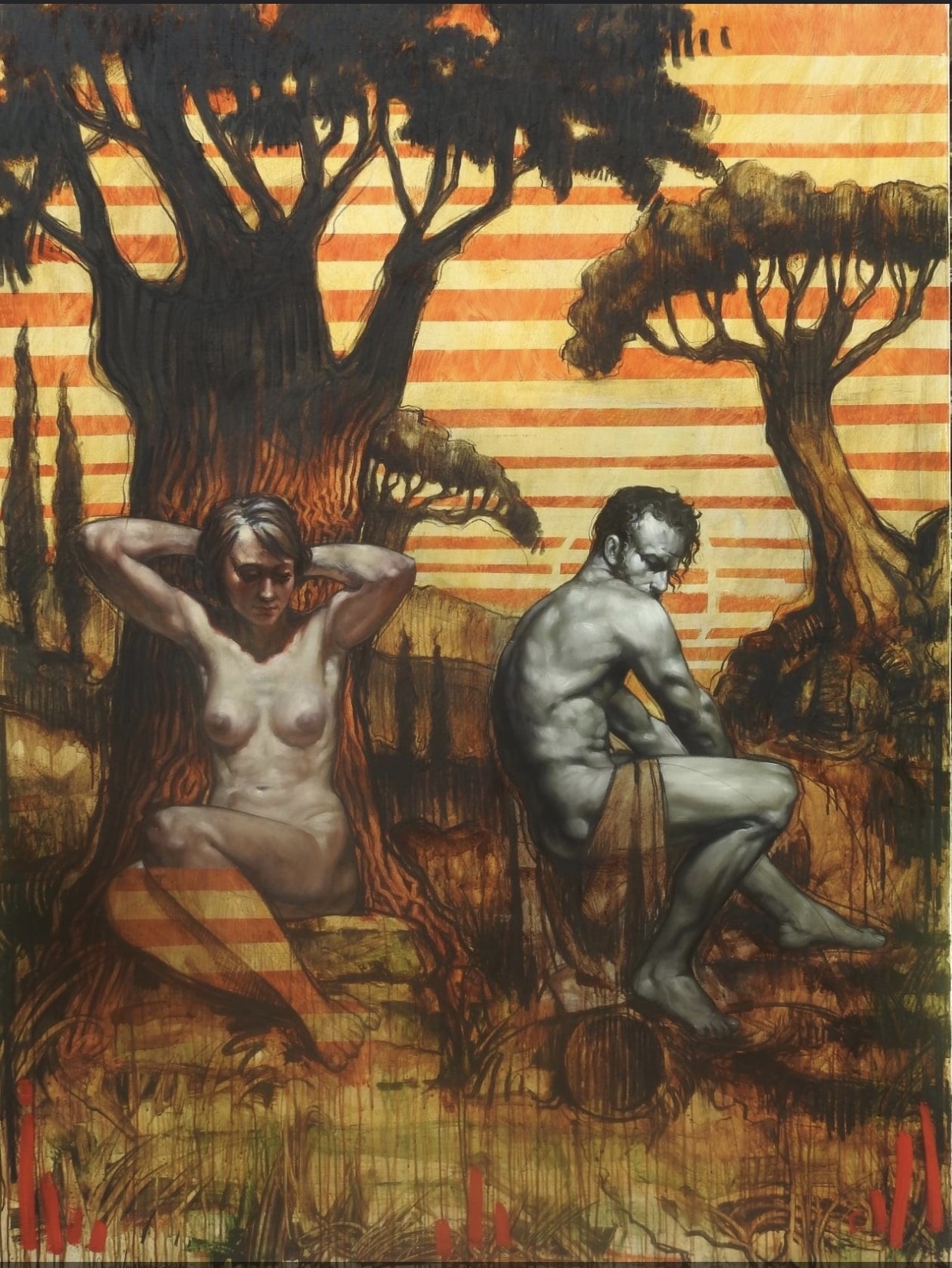 Nico Vrielink was born in 1958 in Reusel in the south part of the Netherlands as the son of a glassblower and it was his father who saw the talent in him. He was educated at an academy of arts in Belgium and he went there at the young age of 10 years only. Staying there for 7 years, he built himself a solid base as an artist in the years to come. Not that his father had that in mind for him: he was to become a teacher on a primary school. The life of an artist offers no security whatsoever , according to Vrielink-senior. Nico's childhood years were spent in an atmosphere of narrow-minded provincialism; the family's restricted mental horizons severely limited the radius of action. For a small boy this is not a problem at first: after all, security is important to children. It was not until much later that the conditions of life in Reusel led to an irrepressible urge to travel and explore - and to permanent restlessness.
The gloomy fathers mentality led to a jack-of-all-trades era which was a rainy prelude to hid dazzling career as a painter. Not particular comforting jobs such as cleaning in an institute smelling of urine, being lumber jack in the south of France, making surf boards in Belgium, working for a truck company, bank, super market and indeed for some time teaching on a primary school. But the tide was soon to turn when he was asked to teach at an art academy in Holland where he stayed for over 2 years and it was after this short period of time that he started his career as an artist an soon organized himself exhibitions world wide.

It started off with his trip to Singapore, after selling out his first exhibition in the Netherlands, where he met Jeane Seah later to become his wife and mother of their 2 sons, Leon and Jerome. The beginning of an immense series of paintings on her; thousands of them and with it up to 30 exhibitions a year world wide , from New York till Jakarta and all countries in between. Vrielink had a tremendous urge to paint and energy to spare. getting up at 5 in the morning with loads of coffee he worked long days, 7 days a week. But art travels easy and Holland became to small for him to live in, so in 1989 he decided it was time to move to France and he bought his first castle in the south, not far from Spain. In this house they lived for 5 years before moving to a huge apartment in Montpellier, when he had at the same time 2 apartments in Antwerp, Belgium. After 2 years of city life ( he couldn't barbecue there…) , he bought himself a 14th century castle in Burgundy, lived there for 9 years and then had his eyes set on a small island in Asia : Bali , Indonesia. Although meanwhile separated from his wife, he still continues to live there with his Koma.

Meanwhile realism in his work is getting less and less important and the story behind it more superior. Happenings, experiences evaluated within a painting.

Over the past 25 years there has been a great deal of media attention for the artist Nico Vrielink. Countless newspapers, magazines, books and tv documentaries have given him and his work extensive coverage worldwide . He had with his work over 500 exhibitions.
Nico Vrielink's universe is supported by granite columns: fundamental values and passions which, as far as balance and interconnections are concerned, are in perpetual motions. Vrielink performs his "balancing act" in the company of a permanently restless midriff and an insatiable desire for new experiences. It would be misrepresentation to characterize Vrielink solely as a superior artist. He certainly is that, but it is only one part of Vrielink "complex". His authentic business sense, his overwhelming production , his irrepressible urge to move from place to place, his colossal hedonism , his monumental love for people - all of these descriptions, including many overblown adjectives, are linked to the personality of this artist.