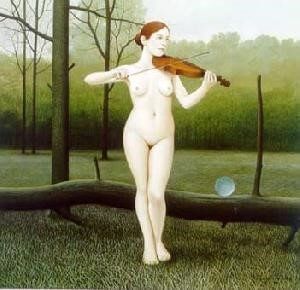 Don Clarke(1932, Birmingham). After his graduation at the Moseley College of Art he also graduated at the Birmingham College of Art. He then started his career working as an illustrator. In 1956, he left for Rome to work as an art restorer. Leaving his native country he established himself in Spain in 1972 where he developed himself as a fulltime painter. Central to his work is the female figure. By placing these, mostly nude, in unusual situations and surroundings, Clarke often creates a mysterious and mystical atmosphere. His work has been exhibited at Artfair in London, KunstRai in Amsterdam, Art Basel, Pan Amsterdam, and Lineart in Ghent. Recently Morren Galleries published a retrospective book about his career and oeuvre.