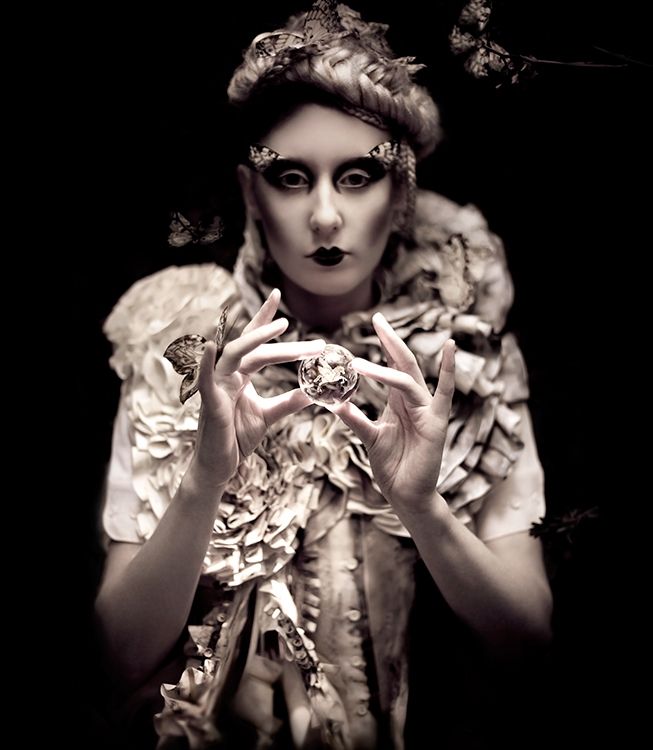 The award winning British photographer Kirsty Mitchell (1976, UK) specialized in “Costume for Performance” at The London College of Fashion, gaining a Higher National Diploma with Distinction. Kirsty completed her training at Ravensbourne College of Art, achieving a First Class Bachelor of Arts Degree with Honours in ‘Fashion Design and Textiles’ in 2001. She interned at the studios of Alexander McQueen and Hussein Chalayan. After graduating Kirsty spent the next decade as a senior designer for a global fashion label specializing in surface decoration and fabric manipulation.

Described as a multifaceted artist, Kirsty Mitchell draws on her past careers in fashion design and costume making, to produce images of beguiling dream-like worlds all shot in the English landscape surrounding her home. Kirsty describes her approach as ‘Fantasy for Real’ spending months meticulously handcrafting her characters costumes and props to coincide with the bloom of wild flowers, and the seasonal extremes of her local environment. Some pieces have taken up to 5 months to create every element by hand, and over a year to plan. The photographs are entirely real, assembled like mini film sets, and shot first hand on location in all weathers. The series has been documented extensively, with behind the scenes photographs and films to demonstrate this.

After a decade of working as a fashion designer, in 2008 Kirsty returned to her early love of photography and began a new and deeply emotional connection with the medium during the treatment of her mother’s terminal cancer. Following her tragic loss, 9 months later Kirsty immersed herself into what became an unexpected and life changing series entitled ‘Wonderland’; intended as a book in her mother's memory. The sudden international recognition for her work led Kirsty to leave her fashion career behind in 2011, to pursue her future as a fine art photographer with articles being published by the BBC News, Vogue Italia, Polish Harper's Bazaar, The Picture Professional and Germany's 'Stern' magazine to name a few.
In March 2013 Kirsty received the title of 'Best Conceptual Photographer of 2012' via the US Framed Awards, and was also appointed the Ambassador of Fine Art Photography for Nikon UK.
In December 2014 - Kirsty won the LensCulture 'Visual Storytelling Award' for the 'Fictional Narrative category. Following the award Wonderland has been featured by world renowned newspaper The Guardian, Germany's largest news platform Spiegel Online, and UOL - Latin Americans largest news home page, with more articles and interviews currently pending.

After 5.5 years, 'Wonderland' was completed in November 2014. The coverage of the series continues to grow with followers all over the world connecting both with the artworks, but also the accompanying autobiographical 'Diary' written by Kirsty of her shoot experiences and the narratives behind the images . The entire project including the artworks, diaries and documentary photography of its creation, has been finished in 2015
Kirsty currently lives and works as an artist in the Surrey countryside, near London and is represented by galleries in London and Morren Galleries in the Netherlands.