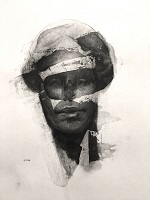 Daniel Ochoa (1980, Santa Rosa, California) received his Master in Fine Arts on the Academy of Art in San Francisco, USA. He lives and works in Brooklyn, New York. Ochoa grew up in a bicultural family. His father was an immigrant from Mexico and his mother a white American. Over time, he learned to perceive cultural dichotomies and accommodate conflicting viewpoints. The deconstruction of his identity is at the root of what he paints and how he paints. He explores personal experiences through his works that are informed by photos, emotions and memories. Working in layers, he uses masking techniques to jumble formal qualities such as abstraction, realistic representation, pixel emulation, and written narrative.

Combining divergent elements suggests a pluralistic reality and the image demonstrates the difference of his bicultural perspective.

Ochoa has several exhibitions in Canada and the USA: e.g. New York, San Diego and San Fransisco. Since his collaboration with Morren Galleries in 2011 his work is recently shown in the Netherlands.

Murphy and Cadogan Fellowship in the Fine Arts, sponsored by the San Francico 2008